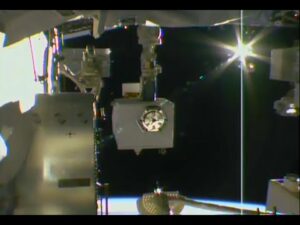 cember 21st, 2021: Aegis Aerospace has launched their next round of experiments aboard the Space Test Program-Houston (STP-H) 7 and 8 packages, following their previous successful Space Test Program missions including STP-H6.

STP-H7 carried six experiments including the CASPR (Configurable and Autonomous Sensor Processing Research) project to the ISS. CASPR is a university-led experiment that combines a variety of technologies in a novel way to demonstrate on-orbit capabilities of onboard data analysis, mission operations, and spacecraft autonomy.

STP-H8 carried three instruments that are expected to perform as smaller, significantly lighter, and much cheaper alternatives to conventional weather satellites, and be capable of collecting the same key data.

Odyssey has been proud to contribute to this project through the creation of the flight software allowing for command, control, communication, and interfacing between the ISS/ground and all of the experiments on both payloads. We look forward to the success of these missions.