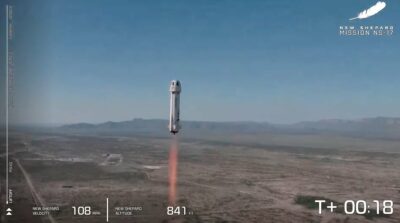 August 26th, 2021: Blue Origin’s most recent New Shepard rocket launch, NS-17, had numerous scientific and research payloads aboard. Eleven of these payloads are NASA-supported, but one payload in particular had Odyssey Space Research support as well. The Deorbit, Descent, and Landing (DDL) Sensor is a science experiment created by NASA JSC’s Safe and Precise Landing – Integrated Capabilities Evolution (SPLICE) project, which several OSR employees support. This payload is mounted externally on the rocket and is meant to test various lunar landing technologies in order to improve future missions to the Moon. This is the second experiment for the DDL Sensor after flying last year aboard NS-13. The data gathered from last year’s flight led to crucial improvements in a lunar lander’s landing capability, broadly widening the number of viable landing sites on the Moon. The data from the NS-17 will be open sourced at some point in the future, just as the data derived from the NS-13 flight was.

Congrats to the entire New Shepard and NASA team!