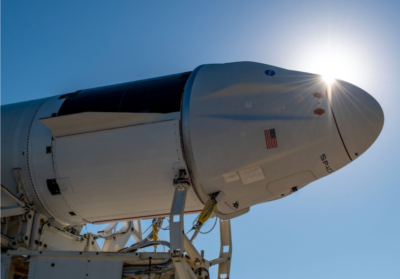 June 3rd, 2021: Congrats to SpaceX for three successful missions to the ISS!

CRS-20 launched on 7 March 2020. The capsule flown was previously used for CRS-10 and CRS-16, marking the third return of this capsule to the ISS. Just a few years ago, a commercial capsule traveling to the ISS would have been unthinkable – as would’ve been reusing a capsule. Thanks to technological innovations driven by SpaceX and others this is now commonplace, and that technology is actually already getting replaced by even more advanced technology.

CRS-20 was in fact the last Dragon 1 flight, with CRS-21 (launched on 6 December 2020) onward using the (Cargo) Dragon 2 spacecraft. One of the most significant differences is that Dragon 1 was captured by the station’s Canadarm2 robotic arm, whereas Dragon 2 is autonomously docking to the ISS. CRS-20 and CRS-21 also both used boosters that had been previously flown on other missions, showing the progress that has been made towards becoming a truly spacefaring civilization.

The most recent mission is CRS-22, which launched on 3 June 2021. Its most important cargo is the first pair of new roll-out solar arrays for the ISS. Many additional missions are scheduled for the near future, using both crewed and uncrewed versions of Dragon 2.

Odyssey has been involved in all uncrewed and crewed SpaceX missions all the way from the beginning of commercial cargo in 2006. Interested in contributing? Please visit https://odysseysr.com/careers!