SpX-19 Berths at the ISS

SpX-19 Berths at the ISS 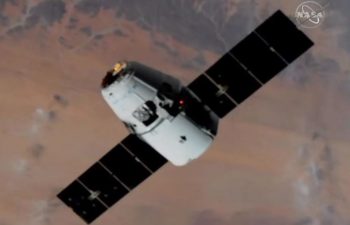 December 8, 2019: An unmanned Dragon cargo resupply vehicle once again successfully reached the International Space Station (ISS) this morning, making it the nineteenth Dragon to reach the orbiting outpost. Flying for NASA under the Commercial Resupply Services contract, SpaceX’s Dragon launched from Cape Canaveral atop a Falcon 9 rocket on December 5th, reaching ISS after a three-day journey. It was captured via robotic arm today at 10:05 UTC, completing the first portion of its mission. The Dragon capsule for this mission was previously flown to the ISS for the CRS-4 and CRS-11 missions, accomplished in September 2014 and June 2017, respectively.

Odyssey personnel supported from the Mission Control Complex at Johnson Space Center in Houston, TX throughout the rendezvous and capture. Dragon will remain attached to ISS for approximately a month before departing for a controlled atmospheric re-entry and splashdown in the Pacific Ocean for retrieval. Congratulations to the entire SpaceX team!