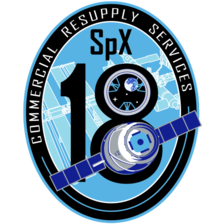 July 27, 2019: SpaceX’s unmanned Dragon spacecraft successfully reached the International Space Station (ISS) this morning, on the 18th mission under the Commercial Resupply Services (CRS) contract with NASA. After a nominal launch from Cape Canaveral on July 25 and a smooth two-day rendezvous, Dragon reached ISS and was captured via robotic arm at 13:11 UTC on July 27, 2019. The Dragon capsule had previously docked to the ISS in April 2015 and December 2017, making it the first capsule in history to dock three times to the ISS.

Odyssey personnel supported from the Mission Control Complex at Johnson Space Center in Houston, TX throughout the rendezvous and capture. Dragon will remain attached to ISS for approximately a month before departing for a controlled atmospheric re-entry and splashdown in the Pacific Ocean for retrieval. Congratulations to the entire SpaceX team!

To find out more about other projects Odyssey is supporting, visit our Projects page