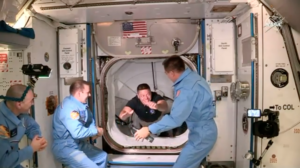 August 2, 2020 – SpaceX’s Crew Dragon launched from Kennedy Space Center on May 30 to begin its historic journey to the International Space Station. This mission marks the first time in 9 years, since the final Space Shuttle mission in 2011, that a crewed spacecraft launched from US soil.  Once the Crew Dragon spacecraft Endeavour docked with the ISS, American astronauts Douglas Hurley and Robert Behnken joined the crew of Expedition 63. Dragon undocked after 2 months attached to the ISS and made a parachute splashdown in the Atlantic Ocean on August 2. The completion of the Demo-2 mission was the final step before NASA certified the Dragon 2 capsule for regular crewed spaceflights. The next Dragon mission and the first operational crewed flight of the Crew Dragon capsule, designated Crew-1, is set to launch near the end of 2020.

Odyssey personnel supported from the Mission Control Center at Johnson Space Center in Houston, TX throughout the rendezvous and capture. Congratulations to the entire SpaceX team!